With less than 2 weeks to go before my latest book “Nigeria’s Soldiers of Fortune: the Abacha to Obasanjo Years” hits bookshelves. Over the next few weeks, I will be announcing the title of each chapter, one chapter title per day. The title of chapter 3 is …

You can buy the book from these places.

Everything You Need to Know About My Latest Book – “Nigeria’s Soldiers of Fortune: the Abacha and Obasanjo Years”

You may have heard that my new book will soon be published. Please see below for information about where and when you can get the book, how much it costs, and a list of answers to all those questions you are about to ask me… ;-)

Where can I order the book?

If you are in NIGERIA you can get it from:

If you are in the USA you can:

If you are in the UNITED KINGDOM you have multiple options, and you can:

If you are in CANADA you can order it from Amazon Canada here.

When can I order?

How much will the book cost?

When will the book be delivered?

Is there an audio book, Kindle or other e-book version of the book?

How can I buy your previous books?

What is the book about?

It is a sequel to my previous books Oil, Politics, and Violence and Soldiers of Fortune. The latest book covers the Abacha to Obasanjo years in Nigeria. The book aims to be the leading authority and definitive reference point for a seminal decade of crisis that shaped modern Nigeria. It is the third in the author’s trilogy of books on Nigerian history (each examining a separate decade at a time).

Can you tell me a bit more about the book’s content?

Sure. With excellent background that can serve as a primer for the uninitiated, and copious new information to amaze even the most seasoned Nigeria expert, this third book of Max Siollun’s trilogy on Nigeria is essential reading.

The silhouette of military rule still looms over Nigeria nearly 20 years after the soldiers departed. Key personalities of the military rule era remain active in Nigerian politics (including current President Muhammadu Buhari). With a breathtaking “I was there” style, the book examines multiple near-death experiences that Nigeria experienced during its last bout of military rule.

Although the book is about a nation, it also follows the trajectory of three captivating individuals. Moshood Abiola was the multi-billionaire friend of successive military governments who was elected president, then had his presidency voided by the generals who made him rich. General Abacha was the mysterious military ruler under whose watch Abiola was arrested and detained, and pro-democracy activists were arrested and assassinated. The third protagonist was former military ruler General Olusegun Obasanjo, who emerged as an unlikely conduit of democracy.

If you missed my live Twitter interview with Okadabooks, you can see the Storified record of it here. I discussed a lot: Nigeria, is history, the state of publishing, and even jollof rice and puff puff!;-)

If you want to read sample chapters of my book Soldiers of Fortune, you can download a sample chapter or two here. Then you can decide whether to read more, some, or all of the book.

Readers with Their Copy of Soldiers of Fortune: Number 31 (Moe @moeodele) 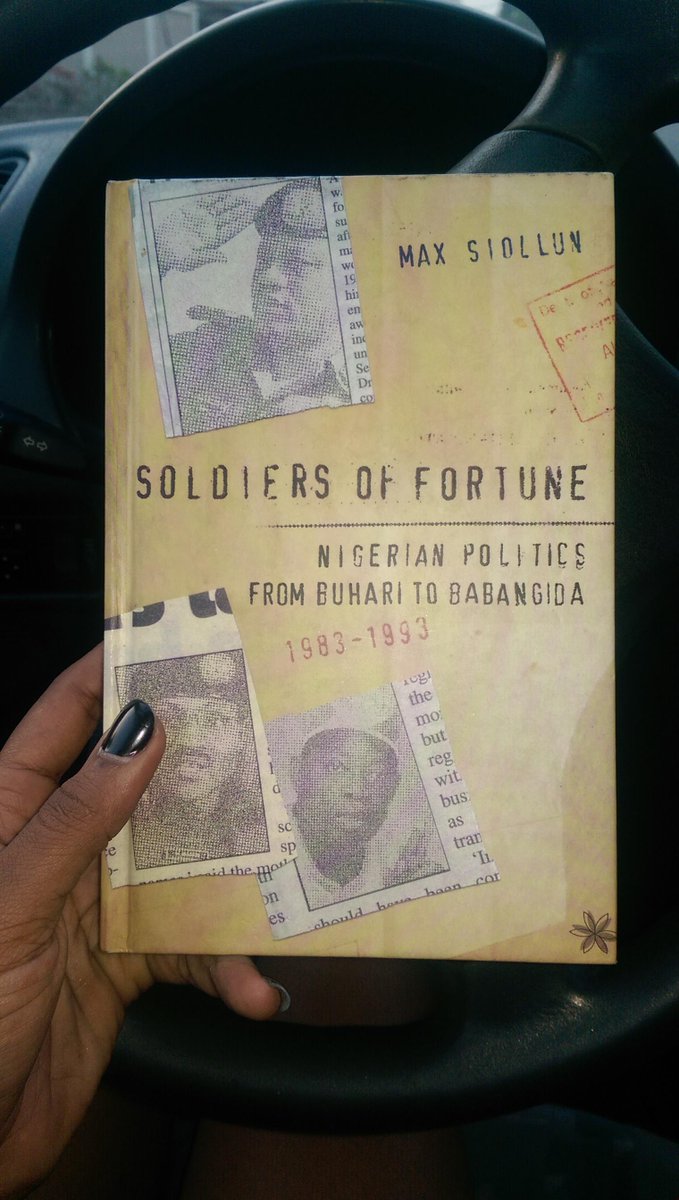 The 31st shout out goes to Oge

Copies of Soldiers of Fortune can now be downloaded to Amazon Kindle from the Amazon website:

Readers with Their Copy of Soldiers of Fortune: Number 30 (Oge – @pinklettuce) 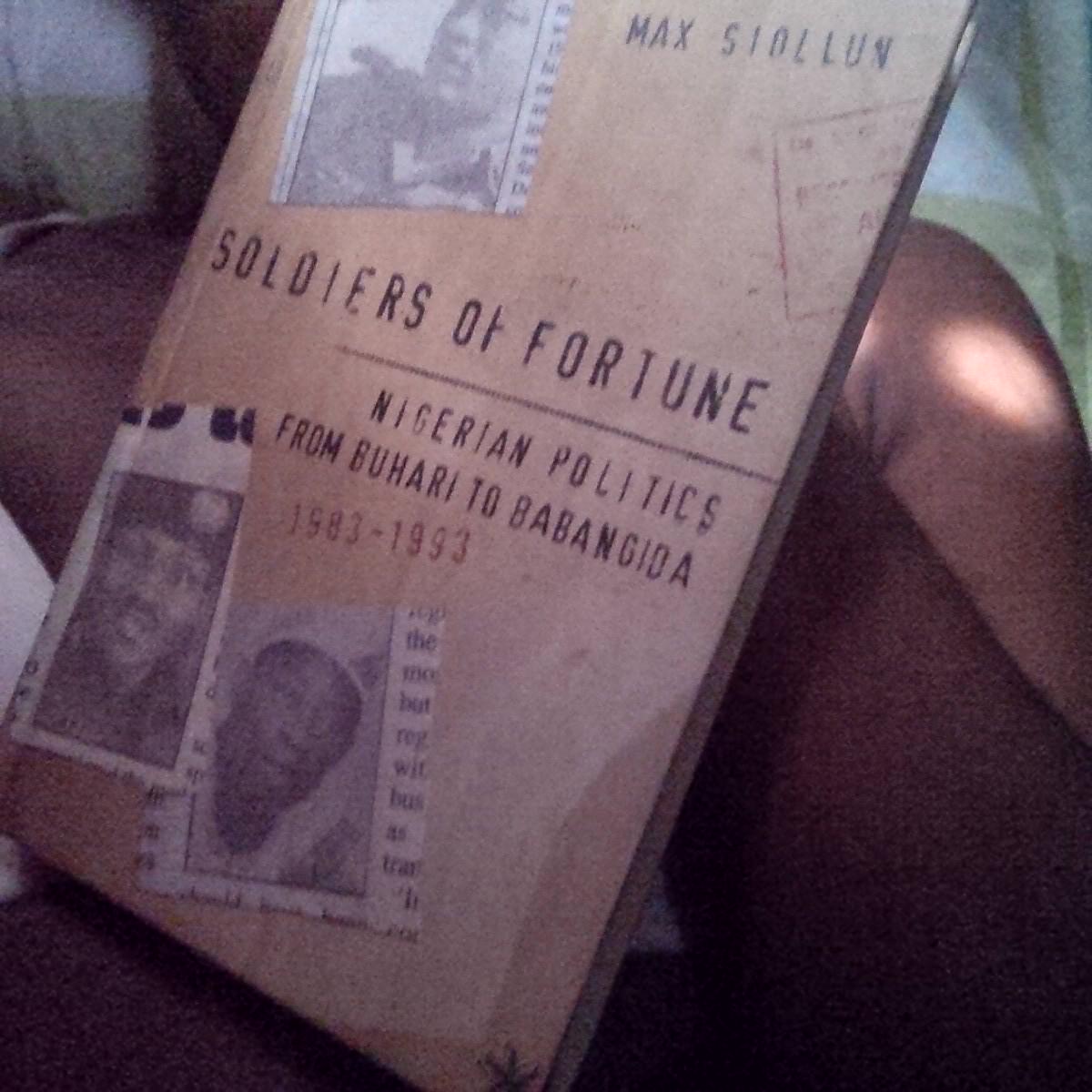 The 30th shout out goes to Oge

Copies of Soldiers of Fortune can now be downloaded to Amazon Kindle from the Amazon website:

Readers with Their Copy of #SoldiersofFortune – Number 25 (Adam Dikko)

The 25th shout out goes to Adam Dikko.

Copies of Soldiers of Fortune can be bought from:

Online from Buyam and Cassava Republic who can deliver directly to your front door: Soldiers of Fortune – A review

History matters. It matters even more when it is about Africa’s most populous country- Nigeria, which celebrates the centenary of her existence this year, 2015. At this point when the younger crop of her over 160million strong population are contemplating the future of their country, a proper knowledge of the past, where the rain began to beat as a popular Igbo adage will say, is imperative to ensure that the future is a different story. And when history is well told, in an engaging manner devoid of academic encumbrance, it makes for a truly engaging read. Such are the accomplishments of the book ‘Soldiers of Fortune by brilliant historian, Max Siollun.

Siollun satisfies in this book, the yearning of Nigerians and non Nigerians alike who have long sought an insight into what really went down during what were undoubtedly Nigerians most important years. The 300 page book captures essentially, the major political events in the country from 1983 to 1993, an uninterrupted period of military rule characterized by coups, rumours of coups and reckless decisions some of whose consequences the country still grapples with.

As many historians have identified, the foundation for Nigeria’s under development was laid in its colonial history. What the British handed over at independence was an administrative liability, a country which was expected to fail. After the euphoria of Independence had died down, the task of fostering development in the country fell squarely on the shoulders of leaders who were in many ways representatives of regional interests. The internal disarticulation and disunity which colonial rule promoted created problematic imbalances and engendered a situation where ethnic domination became an obsession even from the very inception of the country.

It was not long before the young nation came crashing with the 1966 coup. A counter coup followed the same year and a series of events that led to a bitter civil war (1967-1970) in which over a million people mostly Igbo’s from the south east of the country are said to have lost their lives. A brief period of democracy was experienced between 1979 and 1983, a period during which Siollun noted, the military essentially acted as a government in waiting. Populated at its top echelon by the same persons who had been members of the last military government and indeed the core team of officers mostly of Northern Nigerian origin who had executed the counter coup of 1966 and fought the civil war, the military was already too politicized that it found it difficult to stay away from civil affairs. For example, Siollun noted that during this period, some senior military officers drafted a list of government ministers they wanted President Shagari to sack accompanied by a list of their own as replacement.

The politicians on their part helped create an atmosphere that justified the return of the military to power for the ten years stretch of military dictatorship that ‘Soldiers of Fortune’ covers. General Babangida is quoted in the book to have claimed that every coup fed on the frustration of the people with the current government. His claims find merit in the events of 31 December 1983 when following the nationwide disquiet evoked by the general elections that held earlier that year, the Military staged a comeback bringing in General Muhammadu Buhari and later Ibrahim Babangida (who ousted Buhari from power in 1985 and ruled until 1993.) They would remain in control until 1999 when a conclusive democratic transition to civilian rule was effected.

This book, a sequel to his ‘Oil Politics and Violence: Nigeria’s Military Coup Culture (1966-1976)’ by the same author captures the downward slide Nigeria witnessed in all spheres of her national life under the leadership of the duo of Muhammadu Buhari and Ibrahim Babangida. The book captured on the one hand, the defining element of Buhari’s regime, a draconian approach to anti corruption which in the process muzzled the press, promoted inhuman decrees and failed ultimately in bettering the economy which was the most important yearning of the people. Babangida’s reign on the other hand witnessed the glorification of corruption which reached a level Siollun described as ‘spectacular’, the creation of a power cartel some of who continue to enjoy massive influence even in retirement today and a long expensive but inconclusive transition programme.

Soldiers of Fortune reads like a novel, like a thriller with familiar characters some of whose actions you are already familiar with and others which you might scream out in disbelief about. The way Siollun builds his plot and narrative, unraveling the intrigues associated with coups and the tensed drama that defines the success or failures of same, leaves you feeling as though you had a Robert Ludlum or a David Baldacci book in your hand. Readers are sure to pause and wonder at various points at how a handful of gun toting rascals to whom not much intelligence can be credited to, held and decided the fate of an entire country for so long a period, with very little resistance.

While the narration is not academic, there is no doubt a scholarly attention to the detail and judicious backing up of claims with verifiable facts. This combines to make the book a refreshing and engaging read. Siollun’s well researched analysis provides interesting details on the inside story behind most of the critical happenings during the period under review including many of which the absence of information over the years have made to appear like myth. Among this is the way Babangida quelled the Dimka coup, the Diplomatic Baggage story involving ex Minister Umaru Dikko, the Vatsa coup story and the circumstances surrounding the annulment of the June 12, 1993 Presidential elections.

Soldiers of Fortune reveals that the Nigerian military was not as united as most of the people assumed, that the actors were not as powerful as we believed they were, that they had their moments of fear and insecurity like other mortals, that the people, the media and notable personalities alike were accomplices in whatever harm the military succeeded in imparting on the country during their reign.

Importantly, Siollun in this book confirms what undoubtedly is an accepted fact, that military rule in Nigeria embodied everything that is antithetical to development and should never be allowed to happen again. A renewed appreciation of this fact I hope, will ensure that the younger generation who are today aspiring to positions of leadership, will guard her democracy jealously and lead the country back to the prosperity envisioned by her founding fathers at Independence. The book is thus a recommended read for every Nigerian and all those who love Nigeria.

Soldiers of Fortune is published by Cassava Republic Press and can be purchased from:

There are also autographed copies for sale. Available here:

Regular non-autographed copies can be bought from:

Chimamanda is introduced at around the 8 minute mark.


Film trailer for “One Night in Brooklyn” by Nigerian-American actress, writer and director Esosa Edosomwan.  “The film is about a group of Brooklyn bohemians whose bonds of friendship and love are put to the test when they decide to throw a Trans-African Independence Day party. The multi-cultural cast will bring to life characters of Nigerian, Ethiopian, Haitian, Afro-Caribbean, Afro-Latino, and African-American backgrounds.